New book by Stelzig on Robinson the life-writer
Paul Schacht posted on Jun 14, 2010

Distinguished Teaching Professor Gene Stelzig has added another monograph to his list of important scholarly publications in nineteenth-century literature. Though less well known than William Wordsworth, Jean-Jacques Rousseau, Herman Hesse, or Johann Wolfgang von Goethe — subjects of previous books by Stelzig — Henry Crabb Robinson (1775-1867) is noteworthy for his reminiscences of key figures in the English romantic movement. Stelzig's new book demonstrates that Robinson must also be taken seriously as a life writer. Henry Crabb Robinson in Germany: A Study in Nineteenth-Century Life Writing examines autobiographical writings by Robinson that remain largely in manuscript, together with letters and diaries. Learn more about the book in this press release from Bucknell University Press.

Wondering what Geneseo alums who majored in English are doing these days? Interested in catching up with someone you shared a class with decades ago but haven't seen or heard from since? Want to vent about what's missing from the newly redesigned English department website? You can do all these things and more by joining the SUNY Geneseo English Department Alumni group on Facebook. Write on our wall! Start a discussion! Post photos and video! We want to hear from you! 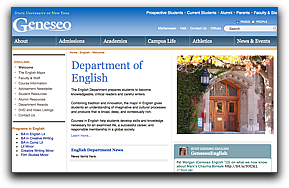 The English department has redesigned its website to make it easier for you to learn more about who we are and what we're doing. New elements of the website include live updates from our Twitter page and links to stories in this spanking-new English department blog. The blog will broadcast important news for majors and chronicle the latest exploits of students, faculty, and staff.