"Falling" into The Hours 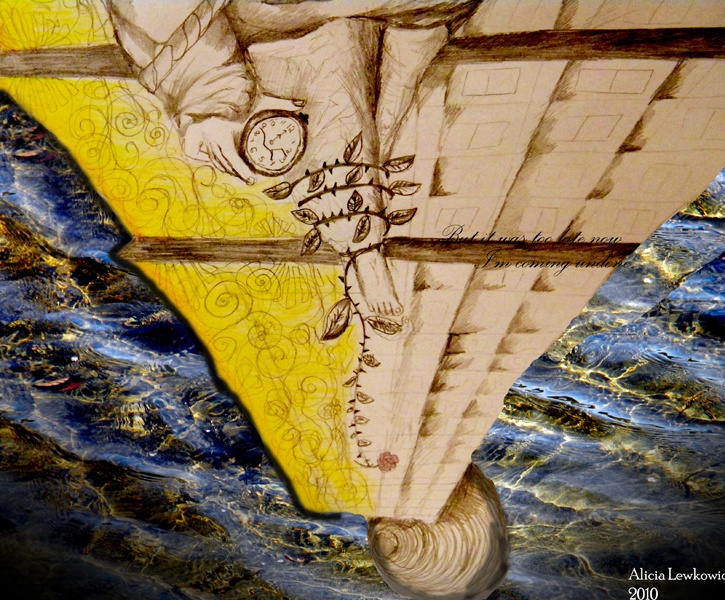 What I intended to do with my drawing/photography of water, was try to portray the concept of being consumed by one’s mind. I wanted to embody both the thrill and fear of being sucked down (I was thinking primarily of Virginia Woolf, Septimus, and Richard although I included a tiny bit of Alice as well.) The person in the drawing, whom I try very hard to keep gender-neutral, is either hanging, jumping, stepping or falling – I didn’t want any particular action to dominate the others. I added the rope around the arm to show a possibility of hanging. While thinking of Richard from the Hours and Septimus from Miss. Dalloway, I had the person “jumping” from a building; while thinking of Virginia Woolf, I had the person stepping with one foot forward down into the water in a gradual descent to self destruction. While thinking of Alice, I had the person falling towards a seemingly never-ending hole at the bottom of the building. While Alice’s falling is not suicide, I found that she, like the other characters, was consumed (temporarily on her behalf) by her mind, and envisioned characters and tales who were not real to the outside, but very real to her (Septimus, anyone?). The difference is that Alice's ending is happy, while the others endings are not. I tried to also incorporate the aspect of "hanging" as part of societal pressures pushing these different characters into themselves and toward the 'brink.' I wondered - how much are the people actually responsible for their own death? In a lot of ways, aren't the demands and expectations of society the very causes of their death? After all, it's society that's keeping them hung up on their problems.

The yellow wallpaper on the side of the building is meant to symbolize a mixture between insanity and imagination. I did not want it to seem foreboding or dark, but rather a golden mural that portrayed freedom (which one will find through either death or dream). Similarly, I included the broken clock – not only to show “The hours” literally, but to show that one can escape the pressures of time with death.