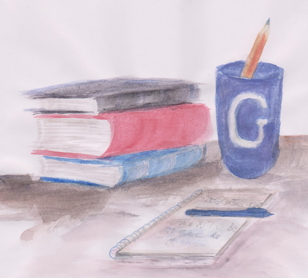 INTD 105's role in Geneseo's general education curriculum will evolve over the next few years. Some of this evolution is already happening, in the form of the companion course INTD 188. Other evolution is likely although less clear in form, as the Curriculum Design Working Group (CDWG) looks at INTD 105 as a model for providing integrative academic conversation in a new general education program. This workshop heard updates on both of these projects.

To go back to the main page, click here.

The INTD 105 coordinators hope to propose a permanent course based on INTD 188 this semester. The proposed course will follow the current (fall 2017) INTD 188 model, i.e., be a 1-credit, online course, co-requisite to INTD 105, that INTD 105 instructors can coordinate with or not entirely at their discretion.

Someone asked if INTD 105 instructors should or could be the instructors for their students in INTD 188. There were strong feelings both for and against this, but it isn't likely to happen, at least at first.

Other participants pointed out that INTD 188 establishes a "common framework" for students to discuss and think about writing, which in turn supports "skilled practice" with writing across multiple courses, ultimately leading (we hope) to real improvement in writing.

Finally, note that reflection is a central part of GLOBE, and ways in which INTD 188 encourages students to reflect on writing is a good contribution to that.

(Note: Following the workshop, the permanent version of INTD 188 was proposed to and approved by senate, as INTD 106. The approved course very closely follows the ideas described above.)

The Curriculum Design Working Group has talked about, among other things, how to involve students in integrative academic conversations. INTD 105 as currently taught can do some of this, although it focuses on writing as opposed to other forms of conversation, and persuasive academic argument as opposed to conversation for other purposes, e.g., reflection on one's learning. One possible model consists of 3 courses, one in the first year similar to INTD 105, one later and more closely tied to students' majors, and one near the end of students' programs focused on reflection.

One thing that this 3-course model could help with is transfer articulation. We currently don't accept transfer credit for INTD 105 except in very limited circumstances, which means that almost all transfer students arrive at Geneseo behind in that part of general education. With multiple courses at different points in the program, students could perhaps transfer in early ones while still achieving the outcomes Geneseo wants through the later ones.

Whatever eventually happens, INTD 105 instructors argued that certain aspects of the existing INTD 105 must be preserved. In particular...

To go back to the main page, click here.