In my last post, I suggested that Alice's conversation with Humpty Dumpty calls into question the view of mind and meaning that sees meaning as a subjective experience.

The alternative view offered by Carroll is a game-changer for the practice of criticism. Literally.

Humpty maintains that he can "make a word mean just what I choose it to mean" — and he's right. All I need do to make "glory" mean "a nice knock-down argument" is to say or write, "In all that follows, let 'glory' mean 'a nice knock-down argument.'" As you listen or read, you'll make the substitution. It's this sort of move that makes encoding possible, from secret messages to software. 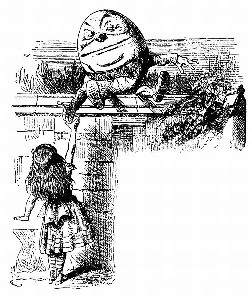 The move is itself made possible by the arbitrary relationship between words and what they signify. Anything can mean anything, as long as we both follow the same rules. And unlike the rules for trials (see the King's "Rule Number Forty-two" in Alice's Wonderland trial), rules about meaning can be invented on the fly. It doesn't matter if I "made it up just now." The substitution rule is itself a "regular rule" — that is, it's already there in the general rules for language. "To make a new word, give the new word and define it." Done.

But the substitution rule doesn't represent permission to live in a world of private meaning. "Let 'glory' mean 'a nice knock-down argument'" is a public declaration. Once I make the declaration, and you agree to follow it, the word's new meaning is not an artifact of my subjectivity or yours; it exists out there in the social space between us.

In this respect, a word is very different from a blue square on the wall. What the square lacks is just this irremediably social quality possessed by the word. When we both hear or read a word like "glory," we may have different cognitive and emotional responses keyed to our different experiences, our different subjectivities, just as we may see the square's color differently. But these responses are not all, or even most, of what we're normally talking about when we talk about a word's meaning.

Alice implicitly understands this, which is why for her, "The question is … whether you can make words mean so many different things." Yes, you can (as we just saw), but in another, equally important sense, you can't. Privately willing a word to have a certain meaning doesn't give it that meaning, since meaning, even when established by the substitution rule, is social. Moreover, most speech and writing don't include special declarations about word-meanings. In most speech and writing, we're relying on the meanings already out there in social space.

The philosopher Ludwig Wittgenstein famously likened language to a game. To know how to speak or write in a given language, he observed, is to know how to play the game. "Wittgenstein, man," writes Eric in response to Sarah. Precisely, man.

It's not only in the Humpty Dumpty chapter that Carroll the gamer perceives this game-like quality of language. As I noted in this post about "Jabberwocky" as an illustration of "pure form," Carroll clearly sees that making intelligible sentences consists of following rules about syntax and word endings. You can follow these rules with invented words as easily as you can with the ones in the dictionary. The result — whether it's Carroll's wonderful poem or Noam Chomsky's Colorless green ideas sleep furiously is "nonsense" — words with no meaning that take the form of meaningful speech.

If meaning itself exists "out there" in social space, rather than "inside" my head or yours, what does this mean for the practice of criticism?

It means that the question of how my subjective experience bears on the meaning of a poem or novel is a red herring. It means that if we look at the arguments that practicing critics actually have about works of literature, we shouldn't expect their differences to spring from "what the words mean to them." Instead, we should expect those differences to spring from disagreements about how to relate the words of the poem to a host of shared understandings — beginning with the meanings of the words themselves — that reside in social, not subjective, space.

The practice of criticism isn't, for the most part, a conversation about competing private visions. If it were, there would indeed be little if any point to the conversation. Criticism is a conversation about objects created in an inherently public medium — language — in which one rule (perhaps, as Alice would say, Rule One) is this: Offer the explanation of the object that does the best job of drawing on publicly shareable knowledge to make publicly shareable sense.

But why, when they follow this rule, do critics end up saying such very different things about works?